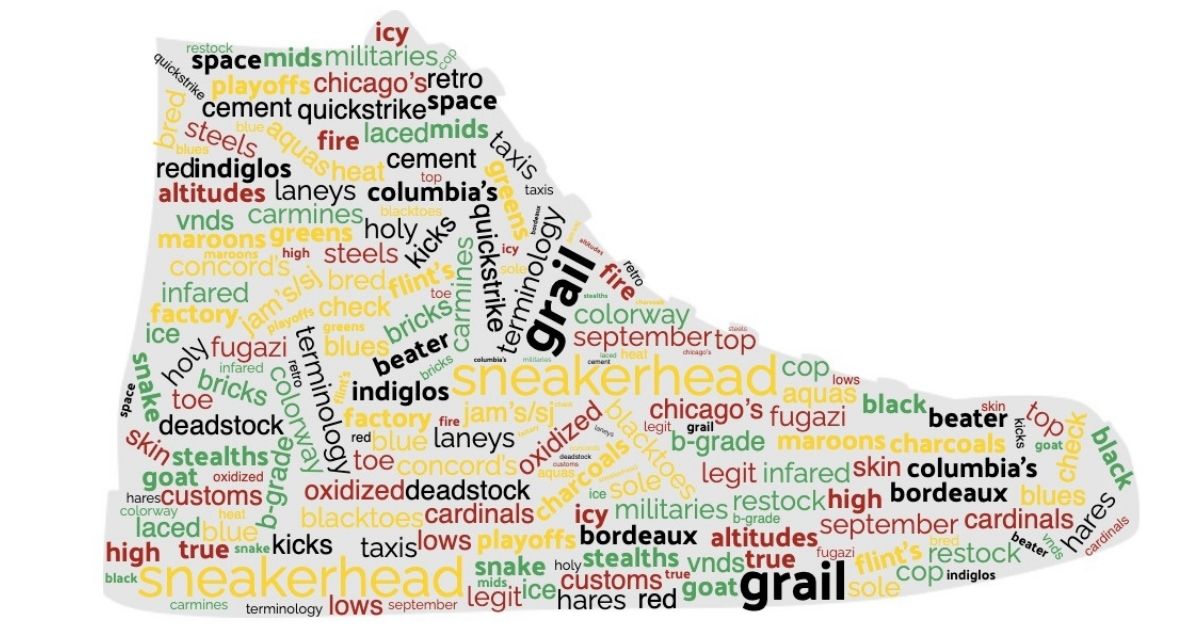 Sneakerheads are people who are very passionate about collecting sneakers. They will buy, sell, and trade sneakers with other sneakerheads to grow their collection. Sneaker culture has remained a core influence; and understanding sneaker jargon will ensure you stay on top of your game. This blog post will identify some of the sneakerhead terminology that sneakerheads should know.

Aquas: Air Jordan VIII’s in black upper and a midsole reminiscent of ocean waves, in a teal and purple pattern.

Altitudes: Air Jordan XIII’s in monochromatic black color, from the upper to the midsole, accented by a pop of green in the outsole.

B-Grade: a slang or moniker for “cheap” or “lower quality” sneakers found at outlets, often at heavily discounted prices.

Beater: shoes that are worn daily or shoes that take a beating; some consider the scuff marks, stains, and creases give it character by giving it that beat-up look.

Blacktoes or Black Toe: 1. The name of the original Air Jordan I’s that inspired the Jumpman logo 2. Iteration of a Jordan I color combination featuring a black toe cap with red and white upper.

Bordeaux: An Air Jordan (most commonly referred to in  VII’s or more recently VI’s) colorway that is mostly black with a dark burgundy accent.

Bred: An acronym that refers to a combination of black and red colors in any pair of sneakers, named after an OG (original) colorway of a Jordan I. It is sometimes used synonymously with ‘bread,’ which means money and implies sneakers that are worth more than their original retail value.

Bricks: 1. The unspectacular or undesirable color combination and or design 2. Sneakers that do not garner profits after release. Sometimes these sneakers end up not selling at all or selling at a price far below predicted or below retail price.

Cardinals: The brilliant red accent found on iterations of Air Jordan VII’s, typically outlining the wave pattern on the midsole.

Carmines: The bright red, white, and black colors that represent the Chicago Bulls, found on the original and retro iterations of the Air Jordan VI.

Cement: A speckled gray effect on the upper of Jordan III’s and IV’s that complements a dominant color of the shoe.

Charcoals: A deep gray that runs throughout the shoe, with black in the upper to complete a Batman aesthetic in the Air Jordan IX.

Chicago’s: One of the most iconic colorways in the Jordan brand, featuring a red toe cap with white and black in the upper. A colorway widely recognized in Jordan I silhouette.

Colorway: The color scheme or color combinations of a shoe model.

Concord’s: White upper with black accents that can come in various iterations of the Jordan XI.

Cop: The act to purchase or buy, whether on release date or aftermarket.

Customs: Sneakers that have been modified with unique, often one-of-a-kind, renditions of the original.

Deadstock: Shoes that have not been worn, in new condition with original box.

Factory Laced: Sneakers that are laced the way they left the manufacturer, sometimes referred to as the Deadstock (DS) Knot.

Fugazi: A slang or moniker for fake or counterfeit shoes; inauthentic sneakers or replicas.

Goat: An acronym for “Greatest of All Time,” such as Michael Jordan.

Grail: Highly coveted pair of sneakers that are rare and or hold special, sometimes sentimental, value.

GR: Acronym for general release, referring to sneakers that are widely available and in quantities that did not warrant a raffle or “draw.” Because these are readily accessible, sneakers of this type of release do not typically resell above the original retail price.

Hares: Iterations of the Air Jordan VII’s that feature combination of a white upper with bright red accents in the midsole, resembling its inspiration: Bugs Bunny.

Heat: Hot or on-trend sneakers that garner attention for their rarity.

High Top: Synonymous with “High’s,” a style of sneakers with ankle support and 9 lace holes.

Holy Grail: Sneakers that are so rare and difficult to acquire, they’re held in the same esteem as unicorns.

Ice: A predominantly white shoe across the upper, contrasted by hints of color such as blue in the Ice Blue or green in the Ice Green of Jordan X’s.

Indigo’s: A fan-favorite of a Jordan XIV colorway; a stonewashed blue upper in smooth leather, contrasted by crisp, white midsole and toe box.

Infrared: A predominantly black Air Jordan VI in the upper and midsole with hints of head-turning red, complemented by a translucent sole.

Kicks: Another term for sneakers.

Laneys: A vibrant colorway of the Jordan V, inspired by Michael Jordan’s High School, in a bright blue upper with gray midsole and a pop of yellow.

Maroons: An elegant interpretation of the Air Jordan VI in an off-white upper and midsole, accented by subtle hints of deep red across the midsole with a milky outsole.

Mids: With 8 lace holes instead of 9 in the Jordan 1 High’s, a Jordan 1 model growing in popularity because of its accessibility at retail and resemblance to the iconic retro or OG colorways in the Hightop (or “High”) versions of this model.

Militaries: Jordan IV’s in an iconic white leather upper with highlights or “Military Blue” or “Military Black” across the midsole and heel tab with coordinating logo on the tongue.

On Ice: Sneakers that are put away with no intention of being worn, similar to sitting in a freezer.

Oxidized Green: Jordan XIV in white leather upper, accented by a light blue Jumpman logo on the heel with a deep green midsole.

Legit Check: Authentication of sneakers to ensure they are made by the manufacturer.

OG: Original Gangster or the original colorways of Jordan 1’s.

Quickstrike: A Jordan 20 colorway that features the iconic Chicago colorway in an unorthodox silhouette with an ankle and midfoot strap.

Playoffs: Symbolic of Michael Jordan’s comeback from retirement to win his 4th championship title, these Jordan XI, XII, or XIII feature the iconic Chicago colors of black, white, and red.

Restock: When inventory is replenished after the original release date.

Silhouette: The style or model of a shoe.

SnakeSkin: Air Jordan XI (or any Air Jordan with a snakeskin colorway) with a prominent snakeskin pattern accent encasing the upper.

Sneakerhead: People who collect sneakers, often of on-trend or rare sneakers, are known for an intense passion for the culture and history behind sneakers.

Stealths: A futuristic Air Jordan XX in an all-black colorway with subtle hints of gray on the heel and outsole, fit for a Sci-Fi film.

Steels: An industrial aesthetic of Air Jordan X’s that come in a white upper, contrasted by black and gray on the tongue and outsole.

True Blue: A nostalgic colorway of Jordan III that comes in a white upper, accented by the signature elephant print and a vibrant blue midsole with a pop of red on the tongue.

VNDS: Acronym for Very Near Deadstock. Sneakers that are worn briefly or tried on only. Sneakers with little or no signs of wear, which can be considered as new or Deadstock.

While many sneakerheads may use the insider lingo for the collection and appreciation of their favorite shoes, the difference in the culture between sneakerheads and other collectors is apparent. Sneakerheads are able to share a common bond with other sneakerheads, regardless of the place they are from or their differences. Sneakerhead terminology is a language to communicate with each other and a culture that is unique to the world of sneakers.

Shoe Storage for Sneakerheads | How To Store Your Sneaker Collection